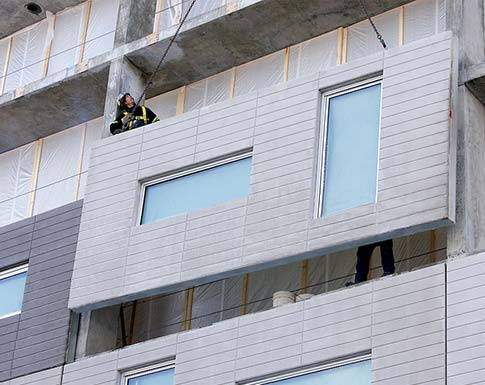 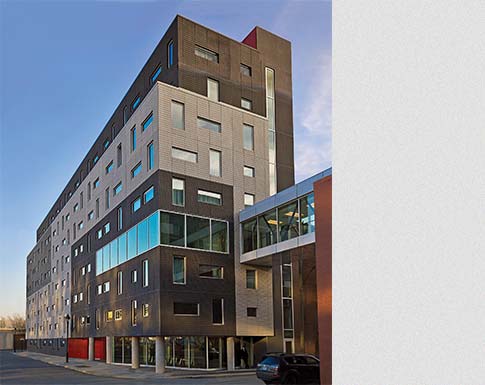 Schedule is always a top concern on construction projects, but it was particularly important for the team designing and constructing the ETS Student Housing for an engineering university in Montréal, QC, Canada, in 2012. "The completion date in August had to be respected as the building was fully rented to students for the beginning of their school year," says Serge Jacques, principal architect for Régis Côté et Associés.

“The lighter panels cut concrete costs, while shortening installation time and reducing the need for additional on-site work trades,” Jacques says. In spite of the large building footprint, the tower crane was able to lift any panel around the building perimeter, and the lighter loads on the structure translated into overall savings. "It gave us a great advantage during erection.”

To save additional time, guarantee quality, and enable cold-weather construction, the precast concrete producer, BDPL Béton Préfabriqué, suggested installing the windows and insulation in the heated plant so the panels would arrive ready to install at the jobsite.

"We believe this never had been done before and it brought great advantages, as well as high rapidity for installing and finishing the interior," Jacques says.

Aesthetically, the precast concrete panel design reflects the vibrant, busy lives of the students who will call this structure home. That goal is achieved through a series of vertical windows that correspond to the dining areas, and horizontal windows that offer panoramic views in study areas and in some of the bedrooms. Three different tints, in gray, white and black, were used to create an interesting pattern across the facade, while mimicking the color scheme of the existing buildings on the downtown campus. BDPL provided custom-made forms to create the effect.

"The design flexibility, the professional approach and cooperation of the precast concrete manufacturer and the overall quality of the panel has made our choice the right one for this project"