SlenderWall Makes a Clean, Contemporary Mark for an Expanding Skyline 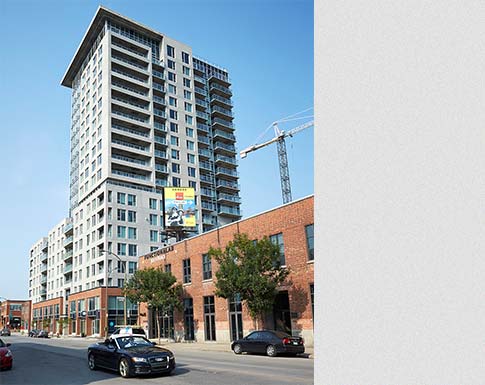 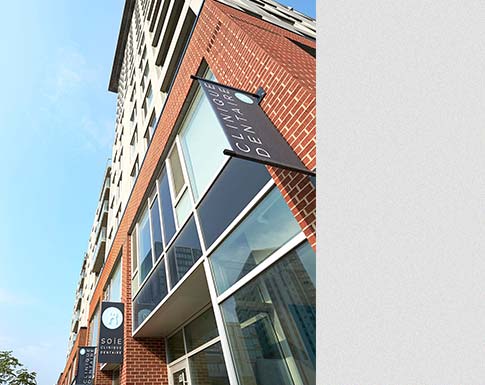 Urban revitalization is a major trend throughout North America, and although each individual development brings its own specific obstacles, certain challenges are more universal. How can a new building respect the past of the existing neighborhood while also looking to the future? How can it be constructed with the newest green building technologies and the most desired amenities at a reasonable cost? With the aid of SlenderWall, the Griffix condominium project in Montreal offers a compelling answer to these increasingly pertinent questions.

The Griffix reaches 20 stories above the corner of Peel and Wellington Streets in the Griffintown neighborhood and houses 175 units of between 545 and 1,245 square feet, as well as commercial space on the ground floor. The building, constructed atop the location's original one-story brick building, has a clean, contemporary finish façade.

A variety of benefits led the project team to consider and employ SlenderWall for this major project. Among those was the high R-value of the cladding and its relatively lightweight, easy-to-assembly nature. SlenderWall's hybrid construction – a lightweight 2 inch-thick precast panel fixed to a heavy-gauge steel frame – provides both the exterior insulated envelope and an interior stud wall ready to receive gypsum board.

SlenderWall's weight advantages over traditional precast panels -- 28 lbs. per square foot versus close to 85 lbs. per square foot – also made it an ideal specification. For example, the contractors could use smaller, lower-cost construction equipment and build the structural frame with smaller members. This helped reduce steel tonnage and associated first costs as well as contribute to lower construction-phase expenses for the owner. In addition, the ability of the system to be pre-manufactured off-site also helped boost the speed of construction scheduling. This proved critical for the developer, who could get the condominiums on the market before competitors in this rapidly changing neighborhood.

For Eric Huot, a principal in the Montreal-based architectural firm of Geiger + Huot and the primary architect involved in the Griffix design, his main mission was “incorporating the existing façade of the historic building, recreating the arcade along Wellington Street, and marrying these to a new high-rise building.” From a site planning standpoint, the solution was to locate the high-rise tower at the eastern edge of the site and leave the corner of Peel Street to the existing building, “in an effort to maintain the streetscape as it had been for most of the last century,” Huot says.

To emphasize the tower’s “distinct expression” in relation to the original building, Huot used SlenderWall and recessed windows to create a cladding design that combines solid masses with punched openings and a “lighter, airy counterpoint of glass curtain wall.”