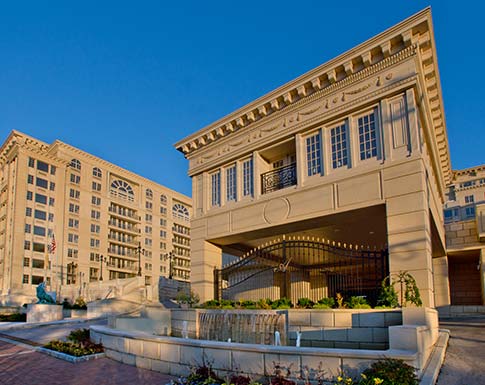 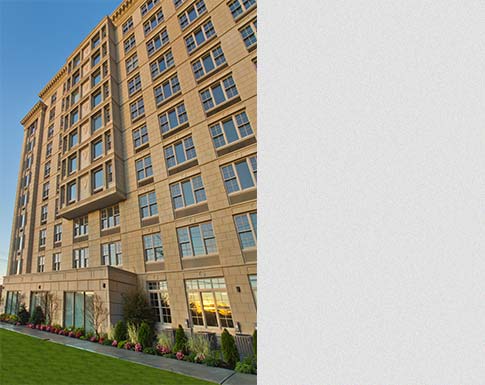 This sophisticated design statement employs SlenderWall to create a durable yet lightweight and highly insulating luxury apartment complex, The Alexander, which suggests classic Park Avenue style. With 300 apartments and many with drop-dead views of the Hudson River and Manhattan skyline, The Alexander – a new and much-coveted apartment building in Edgewater, New Jersey – makes a great first impression. Yet it has as much to offer that’s unseen as there is plainly visible to visitors.

Led by the company’s house architect, the respected Vijay Kale, the Daibes Enterprises team developed a schematic design concept that recalls Manhattan’s toney Park Avenue post-war architecture, with the classic detailing associated with the 1940s and 1950s. The outside was conceived in a buff-colored stone. An acid-etched finish and historical details such as cornices, reveals, and bullnoses completed the elegant, timeless exterior concept. The reveals are designed into the panels to make it look like limestone block that was hand laid, even though it is actually made up of larger panels that are cast in our shop and hung on the building structure. In addition to the reveals and cornice details, Daibes and Kale called for two distinct textured finishes on the panels for the same concrete mix. The contrasting textures make it seem like material has changed color, due to the deeper etching of the precast in some areas.

According to Smith-Midland, which manufactured the SlenderWall panels for this project, this was the first precast building for Daibes Enterprises. The developer had used cast stone, brick and stone masonry for many of its buildings, yet it found the SlenderWall panels attractive for several reasons. Chief among those was the proven durability and robustness of system, ensuring a wise investment for the team. While many observers think The Alexander is all about its impressive visual brand, the Daibes team knows better: It’s about cutting-edge construction techniques, too.

"We went to Virginia to study the panel system for a project in another state, and we were impressed by its capabilities," Fred Daibes, owner of Daibes Enterprises says. "So we decided to use the system again for the Alexander."