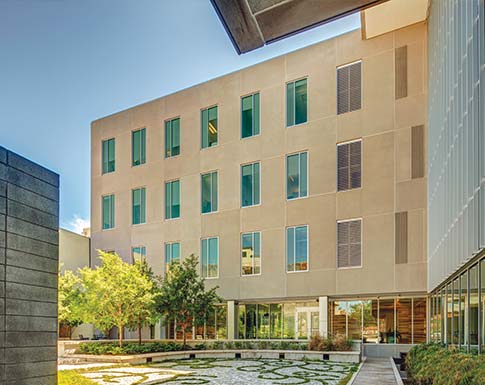 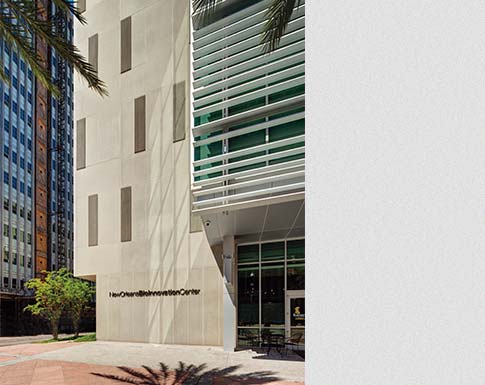 The 65,500-square-foot New Orleans BioInnovation Center, was designed by award-winning architecture firm, Eskew+Dumez+Ripple, in collaboration with Seattle's NBBJ. Built on a revived brownfield site with a design that garnered a LEED Gold certification, this new incubator facility has attracted attention for its unique incubator model, strong architectural presence and people-friendly features.

The BioInnovation Center blends a large expanse of impact-resistant glass curtainwall in its southwest entry façade with the crisp lines of what looks like honed limestone. In fact, the walls are SlenderWall – thin-profile precast panels backed by steel framing that doubles as perimeter stud walls. The primary transparent façade is fitted with a slatted sunscreen to reduce solar heat gain and protect against windborne projectiles during storms. Most important, the SlenderWall panels and sunscreens combine to ensure comfortable daylighting and consistent interior temperatures for the building's occupants in laboratories, offices and a 100-person conference center.

SlenderWall was recommended by the general contractor, Turner Construction. The architects also desired certain cantilever conditions that did not lend themselves to a heavier panel. The architects wanted something substantial but lightweight. Also, the windows were designed for a floor-to-ceiling window profile, which SlenderWall could accommodate with specially designed attachments at the floor line.

In ways big and small, the hybrid precast and light-gauge steel cladding system befitted the architectural sensibilities of Eskew+Dumez+Ripple as well as the needs of their client, adds J. Matt DeVoss, whose company Jackson Precast Inc., of Jackson, Mississippi, produced the SlenderWall system. "It provides a high-end, very architectural finish that can't be as easily achieved and controlled with many other materials," says DeVoss, adding that SlenderWall also stands up to cost analysis for many budgets and project schedules.

To evaluate the building performance and LEED points, the project design team – which included the Atlanta-based MEP engineers Newcomb & Boyd and an enclosure consultant – used envelope modeling mainly to study solar heat gain and bulk moisture drive into the building. The studies showed excellent performance for the Slenderwall portions, and that even with 68% glazing, the main entry façade was only the equivalent of 18% glass, thanks to incorporation of the sunscreen and the highly insulated precast.

The choice of SlenderWall was an easy one for the architects, says Mark Ripple, AIA, LEED AP, principal of Eskew+Dumez+Ripple. "For the cladding we wanted a durable, hurricane-proof and opaque system, and SlenderWall would allow a fine architectural surface and yet be lighter in weight than traditional, heavier precast," says the designer. "The system has a lower carbon footprint than alternatives, and the structures supporting it can be lighter, which is important in our soft soils of Southern Louisiana."