Specifying a Building Envelope that Performs as Designed

The Next Stage of Sustainable Design

Exploring the performance and materials considerations of green building

Specifying a Building Envelope that Performs as Designed

One of the biggest challenges facing designers as they work to create buildings that are more energy efficient is the reality that there is often a difference between the modeled performance of the building design and the performance of the built building. To that end, green building programs are beginning to incorporate elements that require proof of performance once the building is occupied. While these accountability measures are applauded in the sustainable design community, they place another level of responsibility onto the design team that requires the selection of fail-proof or proven products that can withstand the certain degree of chaos and unpredictability that is common on a construction site and then perform as promised once installed.

The building envelope is a great example of an aspect of the built environment that can be designed to deliver the requisite level of thermal performance and then actually perform much worse. To understand how this happens, consider a commercial building envelope constructed with a traditional architectural precast concrete facade. In the design phase, the designer probably referenced the thermal requirements for the building as identified in the applicable energy code, either the International Energy Conservation Code (IECC) or American Society of Heating, Refrigerating, and Air-Conditioning Engineers (ASHRAE) Standard 90.1. While there are important nuances to the mandates of each code, there are similarities in how both IECC and ASHRAE approach defining a requisite thermal performance for a building envelope. 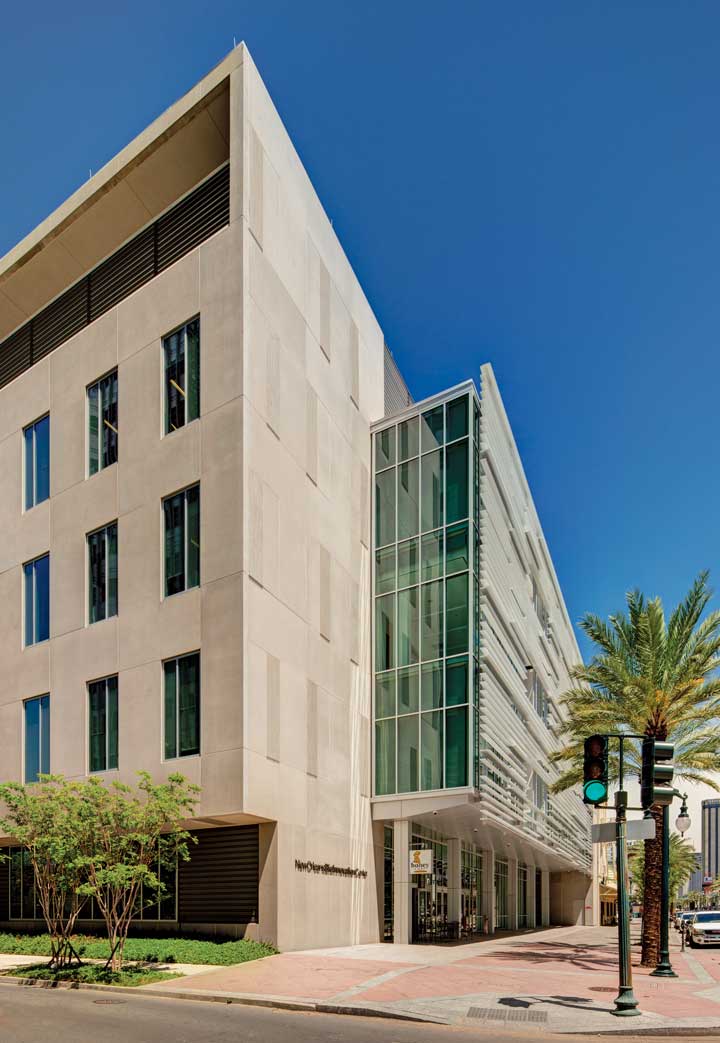 Both IECC and ASHRAE Standard 90.1 divide the United States into distinct climate zones, each with its own minimum thermal performance requirements. The code sets specific insulation requirements for the thermal envelope, depending upon the project’s climate zone and the type of walls, whether they are concrete masonry walls, metal, or framed in metal or wood. It also identifies requirements for building thermal envelope opaque assemblies in terms of the acceptable U-factor. The designer specifies a building assembly that is compliant with the applicable code, meeting the prescriptive R-values and U-values, and selects the desired cladding.

During the construction phase, the building envelope, which consists of many disparate parts and pieces, is assembled layer by layer by different teams of workers. The frame is erected. Traditional precast architectural concrete panels, commonly six to eight inches thick, which will provide the exterior skin of the building is put up. The cavity is filled with insulation. The moisture and air barriers are installed. Mistakes can be made. Gaps occur. Thermal bridging happens. The moisture barrier can be ripped or compromised. These mistakes affect how effectively the building envelope insulates the interior and how efficiently the building operates.

Designers today are looking for building envelope solutions that will perform as specified, reliably creating an efficient barrier against the exterior environment. Factory-built, factory-tested assemblies can eliminate much of the onsite variability that ultimately affects the thermal performance of the occupied building. Solutions like an architectural precast concrete cladding system, which contains the entire envelope system inside a monolithic, panelized unit, can offer designers the reliability they need in this next stage of sustainability, where built performance matters. 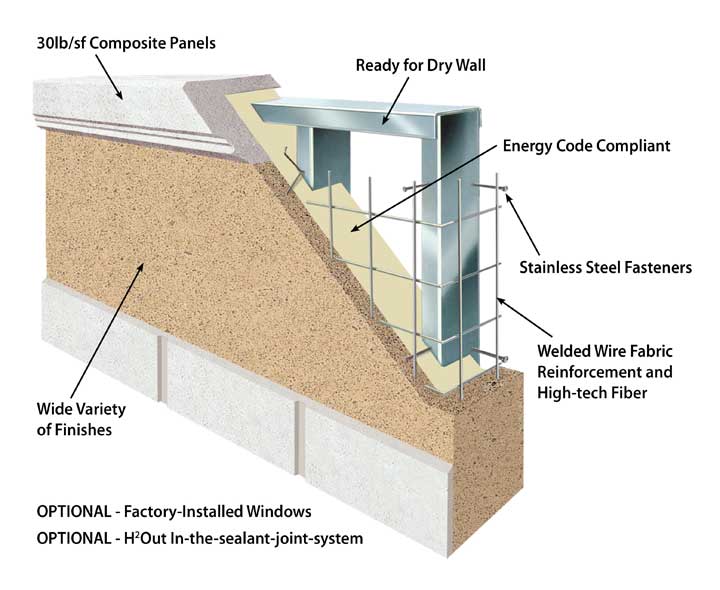 An architectural precast concrete cladding system includes the façade, moisture/air barriers, insulation, and is even available with windows and interior framing.

SlenderWall architectural precast concrete cladding system is a modularized building envelope solution that includes the façade, moisture/air barriers, insulation, and is even available with windows and interior framing. The system features a lightweight 2-inch thick precast concrete panel that is fixed to a heavy-gauge steel frame with stainless-steel fasteners. The way that the exterior concrete face attaches to the frame creates a thermal air gap that is filled with factory-applied, closed-cell foam insulation. The air gap reduces thermal transfer across the assembly by as much as 25 percent, when compared to a traditional architectural precast system. The panels weigh one-third the weight of the traditional architectural precast panels and they enable designers to complete the entire building envelope with one single set of plans. This compact and comprehensive building envelope solution also eliminates the need for multiple insulation and interior crews. The cladding system is easily installed upon the building frame and the interior face of the panel is equipped with galvanized steel studs that are ready for drywall.

In terms of thermal performance, the SlenderWall architectural precast concrete cladding system has been designed to meet 2012 IECC thermal requirements in multiple climate zones. More specifically, this system can be specified in Zones 1 through 8, which makes it suitable for projects in Miami and the North Slope Borough in Alaska.

It is worth noting that manufacturers of building envelope assemblies, like the architectural precast concrete cladding system described in this article, have two code-compliant avenues available for determining the thermal performance of their assembly products. They can use a prescriptive method, which essentially employs calculations to arrive at the expected thermal performance of the solution, or they can test the assembly to attain accurate data on the heat transfer that occurs through the insulated structure in representative test conditions.

“The sustainability movement is moving toward greater degrees of transparency, so that designers have the best, most accurate information available to make their product and system selections,” explained Art Miles, president of Easi-Set Worldwide. “We believe that designers are going to begin demanding performance data from third-party vendors to ensure the products they select can, in fact, perform as the manufacturers claim they can, so we have had our architectural precast cladding system rigorously tested and openly share the as tested results.”

The independent laboratory testing, mentioned by Mr. Miles, was the American Society for Testing and Materials (ASTM) standard ASTM C1363-11 Standard Test Method for Thermal Performance of Building Materials and Envelope Assemblies by Means of a Hot Box Apparatus, during which several architectural precast concrete panels containing varying depths of different closed cell foam insulations and different sized thermal gaps were subjected to different conditions in a hot box test. The test measures the transfer of heat across the assembly and determines the thermal performance in terms of R-values and U-values of a particular building envelope solution. During these tests, the architectural precast concrete cladding system proved to be an acceptable solution for projects located in climate zones 1 through 8, meaning it can be used on any project in the United States and in many areas of Canada.

Designers interested in knowing if the stated R-value or U-value of a thermal performance solution is a calculated estimation or a proven performance result should ask manufacturers for more information.