SlenderWall hits one out of the ballpark

The brick and glass design of the building will integrate well with the existing stadium architecture and become another gem in the burgeoning development of downtown Greensboro. The 24,000+ square feet of SlenderWall and accompanying traditional precast panels will feature inlaid thin-brick over the majority of the surfaces, with banded areas mimicking limestone. A special feature incorporated into the design will be vertical thin-brick faced panels utilizing different sizes of brick and soldier course arches. In addition to their attention to aesthetics, West and Stem made a point of incorporating modern enhancements and materials. SlenderWall’s ability to deliver panels with a R24 thermal rating delivered on that play. 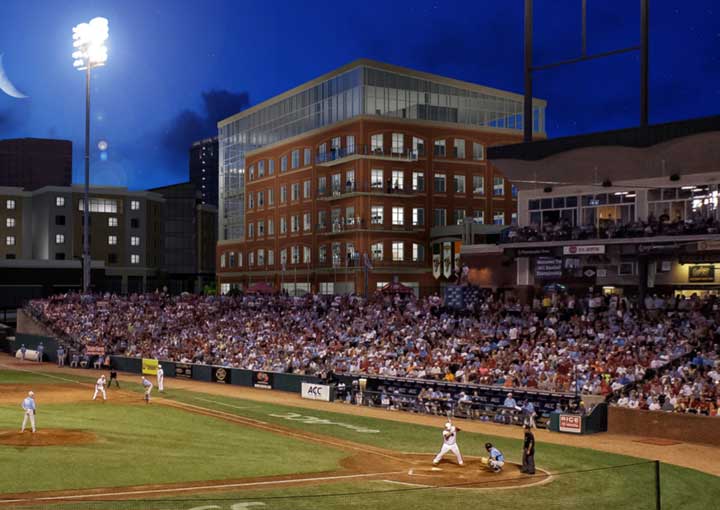 Plans for an office building at the ballpark were originally conceived by Donald Moore, President of the Grasshoppers organization, and brought to owners Front Street Capital. The project became a reality when the lead tenant, Tuggle Duggins Attorneys at Law committed to anchor the building. Another anchor tenant in the facility is First National Bank, who has chosen Downtown Greensboro as their new market headquarters.

Production of the panels is beginning immediately with delivery scheduled in January 2020. Smith-Midland will also provide erection services on the project. Occupancy is expected in the summer of 2020.