Easi-Set Worldwide, a subsidiary of publicly-traded Smith-Midland Corporation announced today that Architectural Record magazine, the nation’s premier commercial architectural publication, chose the BioInnovation Center in New Orleans as one of the annual top ten Good Design Award winners. The 6-story biotechnology research facility was recognized in part for its unique interior design that encourages collaboration among its occupants, as well as a striking exterior, and sustainable practices. The 65,000 sq. ft. building was designed by renowned New Orleans architects Eskew+Dumez+Ripple, in collaboration with Seattle’s NBBJ, in a sustainable and energy efficient manner. The LEED Gold facility—the first of its kind in Louisiana—takes steps to manage water, control solar heat gain and optimize interior daylighting. 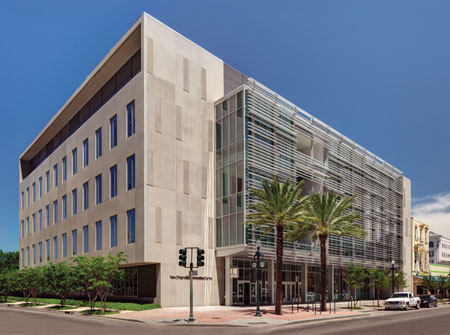 Jackson Precast Inc., of Mississippi, an Easi-Set licensed producer, supplied 22,123 sq. ft. of the SlenderWall architectural precast and steel-stud insulated cladding panels for the project, contributing to the overall design appeal and energy efficiency of the building. The choice of SlenderWall was an easy one for the architects, says Mark Ripple, AIA, LEED AP, principal of Eskew+Dumez+Ripple. “For the cladding we wanted a durable, hurricane-proof and opaque system, and SlenderWall would allow a fine architectural surface and yet be lighter in weight than traditional, heavier precast,” says the designer. “The system also has a lower carbon footprint than alternatives, and the structures supporting it can be lighter, which is important in our soft soils of Southern Louisiana.”

To evaluate the building performance and LEED points, the project design team – which included the Atlanta-based MEP engineers Newcomb & Boyd and an enclosure consultant – used envelope modeling mainly to study solar heat gain and bulk moisture drive into the building. The studies showed excellent performance for the SlenderWall portions, and that even with 68% glazing, the main entry façade was only the equivalent of 18% glass, thanks to incorporation of the sunscreen and the highly insulated precast.

SlenderWall helped ensure a consistent and controlled building envelope. The closed-cell foam insulation acts as a vapor barrier, which contributes to the air- and water-tightness of the structure. That means the panels simultaneously deliver cladding and 3-1/2 inches of closed-cell foam insulation, for continuous air barrier and moisture protection behind a pre-assembled, ready for drywall stud frame wall.

Yet there were other benefits for using SlenderWall. First, says Matt DeVoss of Jackson Precast, was matching the architectural precast used on the first floor with the 110 SlenderWall panels above. “Trying to match architectural precast with another material like GFRC almost never works. But with this manufacturing process, we use the same mix to pour the face out,” he says. “It provides a high-end, very architectural finish that can’t be as easily achieved and controlled with many other materials. SlenderWall also stands up to cost analysis for many budgets and project schedules.”

Easi-Set Worldwide is the industry’s largest licensor of precast concrete products and a wholly-owned subsidiary of publicly-traded Smith-Midland Corporation. More information on SlenderWall, Easi-Set, and its product lines can be found at www.slenderwall.com and www.easiset.com.