Midland, VA - What do you get by combining renowned architects, a burgeoning biotechnology district, and a sustainable enclosure product? 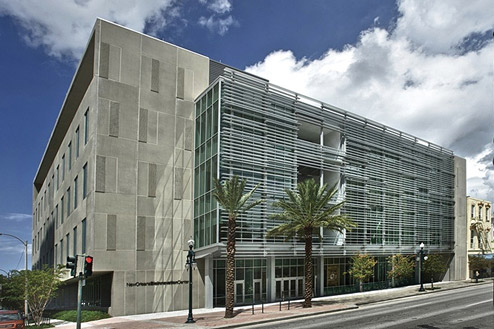 When it's in New Orleans, the result is a memorable, graceful building that complements the city while pointing to a brave, new future: The 65,500-square-foot New Orleans BioInnovation Center, designed by the nearby award-winning architecture firm, Eskew+Dumez+Ripple, in collaboration with Seattle's NBBJ. Built on a revived brownfield site with a design that garnered a LEED Gold certification, this new incubator facility has attracted attention for its unique incubator model, strong architectural presence and people-friendly features, including a courtyard with walkway and fountain.

The BioInnovation Center blends a large expanse of impact-resistant glass curtainwall in its southwest entry façade with the crisp lines of what looks like honed limestone. In fact, the walls are Slenderwall – thin-profile precast panels backed by steel framing that doubles as perimeter stud walls. The primary transparent façade is fitted with a slatted sunscreen to reduce solar heat gain and protect against windborne projectiles during storms. Most important, the Slenderwall panels and sunscreens combine to ensure comfortable daylighting and consistent interior temperatures for the building's occupants in laboratories, offices and a 100-person conference center.

The choice of Slenderwall was an easy one for the architects, says Mark Ripple, AIA, LEED AP, principal of Eskew+Dumez+Ripple. "For the cladding we wanted a durable, hurricane-proof and opaque system, and Slenderwall would allow a fine architectural surface and yet be lighter in weight than traditional, heavier precast," says the designer. "The system has a lower carbon footprint than alternatives, and the structures supporting it can be lighter, which is important in our soft soils of Southern Louisiana."

Slenderwall was also recommended by the general contractor, Turner Construction, according to Brian Stock, national sales manager for Easi-Set Worldwide, a precast products licensor based in Midland, Virginia. The architects also desired certain cantilever conditions that did not lend themselves to a heavier panel, he adds.

"The architects wanted something substantial but lightweight, and they did not want to use EIFS," an exterior insulation and finish system, Stock explains. "Also, the windows were designed for a floor-to-ceiling window profile, which Slenderwall could accommodate with specially designed attachments at the floor line."

In ways big and small, the hybrid precast and light-gauge steel cladding system befitted the architectural sensibilities of Eskew+Dumez+Ripple as well as the needs of their client, adds J. Matt DeVoss, whose company Jackson Precast Inc., of Jackson, Mississippi, produced the Slenderwall system. "It provides a high-end, very architectural finish that can't be as easily achieved and controlled with many other materials," says DeVoss, adding that Slenderwall also stands up to cost analysis for many budgets and project schedules.

"We practice unabashedly modern architecture in a city known for its historicism and architectural scenography," says Ripple. "So for us, the challenge is simple but the resolution is hard: Do buildings that are both of their place and their time." That means using time-tested means for dealing with the hot, humid climate with powerful storms and wind-driven rains, while also creating a building that reflects the social nature of the city.

In broad terms, that meant wrapping an L-shaped layout of labs, offices and public facilities around a landscaped interior courtyard – a classic New Orleans conceit – that passersby can glimpse through the main facade. The courtyard is one of several amenities for the building's laboratory researchers and biotech executives, who tend to work long hours and desire social areas for breaks and spontaneous collaboration. Another exterior feature is a fully integrated rain cistern incorporated to modulate and control the significant rainwater of the area on the site, which the architects utilized in both functional and aesthetic features like plant watering, indoor brownwater, and exterior fountains.

The four-story building was conceived as a very public glazed main façade with a covered public entry meant to suggest a classic New Orleans balcony condition. An aluminum sunscreen above the entry elegantly curbs the sunlight entering the building. The secondary exterior walls are more private and controlled, for research spaces, with punched windows.

To evaluate the building performance and LEED points, the project design team – which included the Atlanta-based MEP engineers Newcomb & Boyd and an enclosure consultant – used envelope modeling mainly to study solar heat gain and bulk moisture drive into the building. The studies showed excellent performance for the Slenderwall portions, and that even with 68% glazing, the main entry façade was only the equivalent of 18% glass, thanks to incorporation of the sunscreen and the highly insulated precast.

Slenderwall helped ensure a consistent and controlled building envelope, adds Easi-Set's Stock. "The precast sections were delivered from the plant with closed-cell foam insulation that also acts as a vapor barrier, which contributes to the air- and water-tightness of the structure," he explains. That means the panels simultaneously deliver cladding, 3-1/2 inches of closed-cell foam insulation (R-21), with a shop-applied, continuous air barrier and moisture protection behind a perimeter stud frame wall.

Yet there were other benefits for using Slenderwall. First was the tight project site on the main transportation artery of Canal Street in the city's downtown core, which limited crane access. Traditional, heavy precast elements, which weigh 78 lbs. per square foot, require a larger crane; with Slenderwall – at only 28 lbs. per square foot – a smaller crane could be used. The lighter panels took less time and space to hoist, too, and the lighter weight also saved the State of Louisiana on costs for related structural framing, moment connections and foundations. In addition, the panels would meet the local hurricane code, which references the Miami/Dade County standards for wind and impact resistance.

Further, the precast assemblies are cast with a steel-stud frame during manufacturing, says Jackson Precast's DeVoss. That frame is mounted outboard of the floor edge. Then it is used after erection to receive drywall and other interior finishes, eliminating the cost of a traditional knee wall and opening up an additional 4 inches of available floor space around the entire perimeter.

The state-funded biotech incubator project was commissioned by the state agency, Louisiana Economic Development, as one of three incubator sites in New Orleans, Baton Rouge and Shreveport. In New Orleans, says Z Smith, director of sustainability and building performance at Eskew+Dumez+Ripple, the biotech business incubator benefits from its proximity to Louisiana State, Tulane, Delgado, Xavier and other higher-education science hubs.

"The tenants at the New Orleans BioInnovation Center are developing huge projects and valuable startups, and the idea is to provide an attractive facility at attractive rates so we can keep this intellectual capital here in the state of Louisiana," says Smith, who is also on the adjunct faculty at Tulane School of Architecture. "Inside these walls, we've designed successful generalized facilities that would work for a wide selection of start-ups and bigger companies that need 10,000 square feet of cleanroom and labs – and anything in between."

For this social city, the project also shows the design potential and sustainability benefits of Slenderwall, a proven composite technology of precast concrete exterior panels integrated with finish-ready stud framing. The high-end finish, which looks like a honed limestone cut in large, joint-free expanses, actually contains an engineered assembly, shop-fabricated and pre-insulated, weighing only 28 pounds per foot.

Like the biotech labs contained within this elegant building, Slenderwall incorporates a high level of research, too.