Midland, VA - Several innovations in sustainable, lean construction techniques have been gaining broad adoption. One of those is a hybrid enclosure system combining lightweight, architectural precast cladding with a highly insulated inner barrier wall of closed-cell foam and metal studs. Replacing the work of four separate trades, this composite product has been credited with reducing project schedules and costs, sometimes by two months or more. Yet it also offers aesthetic flexibility while ensuring proper building envelope function – two key aims of every project team. 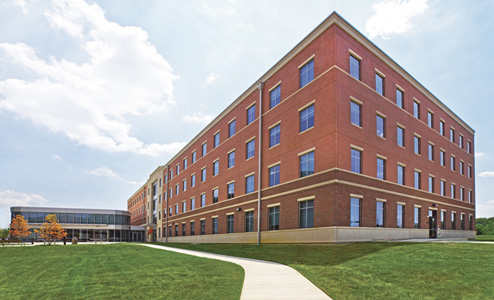 A recent example of its use is a new, four-story legal office building and courtroom at Fort Belvoir, Virginia, spearheaded by the U.S. Army Corps of Engineers for its client, the U.S. Army Legal Service Agency Administration. Aiming for LEED Gold, the project's design/build team led by architects at Perkins+Will and BCRA Inc. and the contractor Suffolk Construction focused on methods for achieving a high-quality, durable building that could be constructed within a short, 12-month fast-track schedule.

On a design level, the building – called the BRAC 132 Army Administrative Facility – had to "express the permanency of the court system and the high ideals to which the military legal system adheres," according to Andrew Rashid, Perkins+Will’s science and technology market leader, Washington, D.C. Conceived in a brick finish to match the base’s buildings, "The building exterior incorporates two simple volumes and flat roofs that provide a transition from the adjacent new hospital facility to the more traditional pitched roofs on the base," says Rashid, while the court wing, with its double-height interior and curved, glass-walled façade, "is distinct from that of the administrative portion, emphasizing its unique function."

At the same time, the team looked at ways to boost productivity and reduce waste while ensuring a high level of workmanship and quality, according to Chris Seveney of Suffolk Construction. "A project like this would typically carry a delivery schedule of 24 months, but it was given a congressionally mandated completion date of one year," says Seveney. "It was essential that the team use as many lean design-and-construction practices as possible."

On top of these challenges, the U.S. Army saw the new facility as an opportunity to meet the U.S. Green Building Council's LEED certification for green buildings. A minimum LEED Silver was given as the project goal.

Taking time to compare a variety of building approaches, the team considered using the novel composite system, Slenderwall, which combines a precast exterior panel with an integrated perimeter stud-wall system. The cladding could match the local brick finish and had punched window openings, with sections up to 26 feet wide to minimize visible joints. Slenderwall could also simultaneously install the perimeter stud frame wall around the entire 97,300-square-foot building footprint. Filled with closed-cell foam insulation at 3.5 inches deep, the 169 discrete panels would also deliver high thermal performance of R-21 with a continuous air and moisture barrier.

"The selected wall system also already had approvals for meeting the strict anti-terrorism criteria for security and blast-resistance as required for all new government buildings by the federal departments of Defense and Homeland Security," says Jeffrey P. Wholey, manager of business development with Smith-Midland, the precast subcontractor. "Yet it is a lightweight method of only about 30 pounds per square foot, mounted outboard of the floor slab."

Smith-Midland took only 14 days to enclose both buildings with the 10-foot-tall panels, according to Suffolk Construction, helping telescope the schedule. The use of the Slenderwall system further saved time by eliminating the need for an insulation contractor and carpenters for perimeter wall framing. "This compares to the eight to 10 weeks you would need for traditional brick veneer masonry, with two more weeks for the interior framing, and five days for closed-cell foam application," says Wholey. "That potentially saved the team 11 weeks."

The exterior, which combines a brick veneer finish with buff-colored banding and windowsills, matches the brick finishes used throughout the Virginia military base, yet projects the image of a modern office structure. The exposed precast concrete resists moisture intrusion thanks to an integral concrete admixture employed in the manufacturing process of all Slenderwall panels.

The use of the pre-engineered Slenderwall system, along with other prefabricated assemblies and standardized details, saved the U.S. Army both time and money – but without sacrificing quality. Inside, the buildings feature traditional wood wainscoting, stone lobby floors, and ample daylight. In fact, the fast-track project won the first-ever "Best Lean Construction" Award from the Associated General Contractors, and later earned LEED Gold certification.

Although government projects are required to target LEED Silver as a minimum, by using Slenderwall and other green techniques the team was able to earn enough additional points to achieve LEED Gold. For example, Slenderwall is a high-speed cladding technique that produces minimal construction waste and requires no scaffolding. It is much lighter than traditional precast, which in some cases allows downsizing of the steel structural frame and foundation.

Other advantages of Slenderwall include saving valuable interior space. The 8.5-inch-deep panels attach using gravity connects and lateral connects at the floor slabs that don’t impede use of the full slab surface. After the pre-insulated panels are installed, the 3/4-inch joints are completed with caulk and a backer rod, and then sprayed over with closed-cell foam for a continuous thermal and air/moisture barrier.

"This project shows how the federal sector can think lean and smart in future projects," says Heidi Perham, NCARB, AICP, managing director with BCRA, which designed the interiors and later presented the project at the 2012 Design-Build Institute of America Federal Sector Conference in Arlington, Va.

Just as important, the project vividly captures the case for employing more sustainable, lean construction techniques such as Slenderwall's hybrid structure of insulated precast cladding with a perimeter frame stud wall. "Lean construction is a movement," says Smith-Midland's Wholey. "But its methods will be adopted widely as project teams search for more ways to build quickly and cost effectively while still retaining excellence in design."